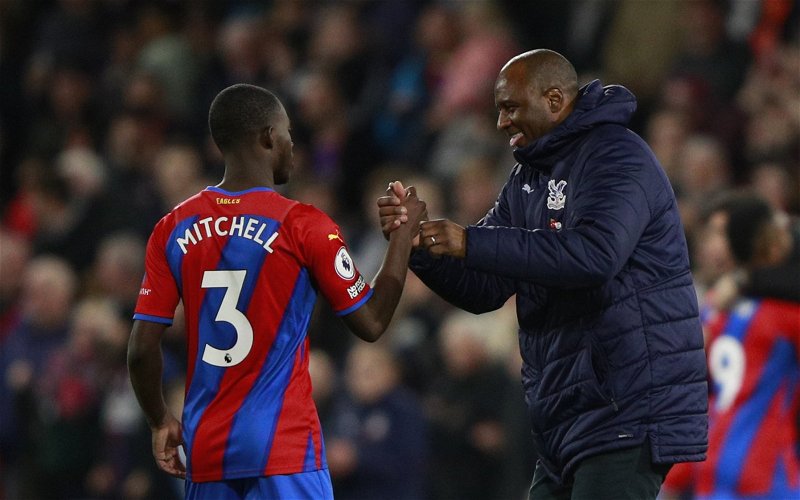 Dan Cook has been speaking on the HLTCO podcast about Crystal Palace’s potential transfer plans once Jean-Philippe Mateta departs.

Crystal Palace are set to have a free loan spot emerge within their first-team squad in January as reports have claimed that Mateta will be allowed to cut his loan deal at Selhurst Park short, having joined halfway through last campaign and started just three games in the league.

Sources in France have linked the striker with a move to Ligue 1 side Saint-Etienne.

Palace fans and Vieira himself will be hoping that, if they do bring in another loan signing, that they can have a similar impact to the one they signed over the summer, with Conor Gallagher netting four times and registering three assists while also earning his first England call-up.

Cook is interested to see which area of the pitch Palace decide to target in January.

“If Tyrick [Mitchell], heaven forbid, got an injury that saw him out for a month, two or three, we would have to put something of a square peg in a round hole to fill that gap at left-back, and it’s not optimal.

“I think that’s fair to say on every single level, so it’s certainly going to be interesting to see what we do with that loan space once Jean-Philippe Mateta has vacated the football club – I think it’s a case of when not if now.”

It appears clear to see that the Eagles should be looking to add depth to their squad and not necessarily first-team players in January, as they have a solid first XI which saw them beat Manchester City, but since the injuries to both James McArthur and Joachim Andersen, they are winless.

They do still have Nathan Ferguson to come into the first-team picture, with the young defender still yet to make his debut for Palace after his somewhat controversial move from West Brom, but they may need more bodies in they are to fend off any slim threat of relegation.

Also, their star man Wilfried Zaha is set to leave for the Africa Cup of Nations later this year to represent Ivory Coast and that will see them lose one of their most experienced and reliable players in front of goal, so potentially a new attacker could be on the cards, despite Cook’s concerns elsewhere.

In other news: ‘Inexcusable’ – Dan Cook blasts 24 y/o who has ‘been given opportunities’