A number of Leeds United fans have jumped to some fearful conclusions after Kalvin Phillips pulled out of the current England squad.

The club’s official website announced that the midfielder would not be playing for the Three Lions during the international break due to a calf strain he suffered in his side’s most recent win against Watford.

The update went on to explain that he will now stay at Thorp Arch for treatment with Leeds’ medical team. 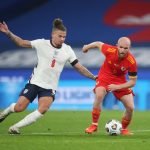 The news of a potentially season-disrupting injury clearly did not go down with the Leeds fanbase when it was shared on Twitter.

@SamOGara4
“I have no words.”
@hhheatherrrc
“The injuries we suffer are literally ridiculous, hopefully be fit and raring to go for Southampton in two weeks.”
@FPLFan91
“Nooooo gutted for Kalvin. Speedy recovery please.”
@JohnmjtJt1919
“NOOOOOOOOOOOO.”
@WidowgastsM9
“Nah, day ruined.”
@sxphie_blxnt

In the short term, Gareth Southgate and co could well miss the presence of Phillips in the heart of England’s midfield after he impressed this summer at Euro 2020. The Three Lions will face two World Cup qualifying matches against Andorra and Hungary without the midfielder.

These Leeds fans probably won’t worry too much about that, though. With the 25-year-old an essential member of their team – playing in six of the club’s seven league games this season – they’ll likely be hoping the injury withdrawal is nothing more than a precautionary act.