One name which was discussed was Wolverhampton Wanderers winger, Adama Traore, with speculation surrounding the future of the Spaniard.

Would you like to see Adama Traore at Spurs? 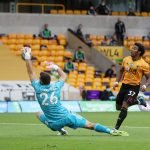 In recent days, Tottenham Hotspur have also been linked with a potential summer swoop for the Wolves ace, with The Daily Mail reporting his value to be £45m, if Harry Kane is to depart the club this summer. Links to the Lilywhites have emerged with Traore’s former boss, Nuno Espirito Santo, now at the helm of the north London club having left Wolves at the end of last season.

Despite coming into the new campaign off the back of an underwhelming 2020/21 season, Romano had the following to say on a potential big-money move for the Spaniard:

“For Tottenham, now they are trying to resolve the situation of Harry Kane. If maybe they sell Harry Kane he could be one of the names on the list.

“I’m told that it’s true that, of course, Nuno likes the player, he had him at Wolverhampton so it’s normal. But talking about the board, also from the board there is some interest in Adama Traore.

“He’s not the priority now because now they have different priorities, they have to check the situation and other positions, but he’s one of the names that they have on the list.”

With less than two weeks remaining in this summer’s transfer window, there is still a sense that an awful lot rests on the future of Harry Kane. A potential move to Manchester City is still being rumoured, however, there has to be serious question marks as to whether Spurs would be able to act quickly enough to address his potential departure with new arrivals?

If Kane is to depart, we are not convinced Traore would be able to provide Spurs with a big enough impact to help match the goals they would lose through the 28-year-old.

Traore had a pretty poor 2020/21 campaign in the Premier League and we don’t think a potential move to north London would inspire the Tottenham faithful.