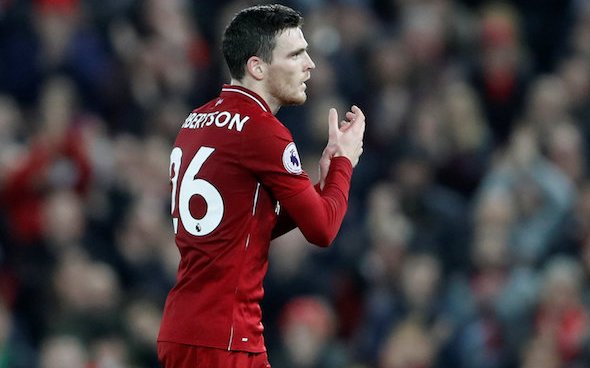 Liverpool journalist James Pearce has provided an update on the future of defender Andy Robertson at the club.

The 27-year-old has arguably been one of the bargains of the decade for Liverpool, having signed for an initial £8m, he has gone on to become one of the best left-backs in world football, even being named in the UEFA Champions League Squad of the Season back in 2019 for his exploits in helping the Reds win the competition that year.

The summer has been one of new deals at Liverpool, with the likes of Trent Alexander-Arnold, Alisson and Virgil van Dijk all signing extensions at the club, whilst captain Jordan Henderson is also expected to sign one in the not-too-distant future.

And speaking on The Red Agenda podcast, Pearce hinted that Robertson could soon be following in their footsteps, with a new deal of his own in the works and likely to be confirmed sooner rather than later:

“I’d expect Andy Robertson’s new deal to get wrapped up pretty shortly as well. Those talks have gone well, and Liverpool are looking to tie him down for the long term.”

There is clearly a pattern emerging when it comes to Liverpool trying to tie down as many of their core players for as long as they can so that they can continue on this dynasty that they started back in 2019 with the Champions League, and which hopefully could become something great over the next few years.

And having contributed 37 assists to the club over the past four seasons, Robertson’s attacking prowess has been a crucial component to their recent dominance, so you can see why they would want him to commit to a long-term deal as well as they look to challenge for the top honours once again this season and beyond.

The only question now is who is going to be the next player that the club tie down to a new deal.

In other news: ‘He’ll be in and out’ – Bold Liverpool player claim emerges