Lots of Newcastle United fans have taken to Twitter to voice their thoughts on the latest images to emerge regarding their kits for the 2021/22 season.

An image emerged on Twitter and was reported on by The Chronicle showing the claimed home and away Newcastle shirt for the upcoming season – although it is believed one of the kits in question could be a goalkeepers’ jersey.

The Toon announced they will be unveiling their 2021/22 home kit on 10th July after offering the fans a glimpse of the shirt on the club’s Twitter account earlier this week, which was followed up by a second teaser ahead of the release.

Which of these leaked kits do you prefer? 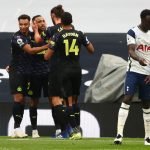 Toon fans flocked to Twitter to share their frustration at the image to surface showing their claimed shirts for next season.

Steve Bruce’s side kick off their 2021/22 Premier League campaign with a clash against David Moyes’ West Ham United at St. James’ Park on 15th August.

Going by the reaction of these Newcastle fans, it seems they are not impressed by the image of these reported Castore shirts, with one even claiming they miss Puma already.