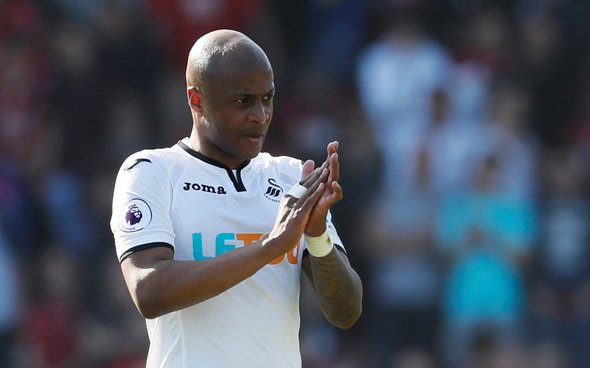 Crystal Palace already have his brother Jordan Ayew on their books, but Andre Ayew has been discussed as a potential target on the latest episode of the HLTCO podcast.

Andre Ayew is now a free agent after not signing a new deal with Swansea City following their defeat in the play-off final against Brentford earlier this year.

This has led to the Ghanaian being linked with clubs such as Newcastle United and Palace but an emotional link-up with his brother Jordan may give the Eagles an edge on any other possible suitors.

The free agent impressed during his time with the Swans in the Championship, managing to score 31 goals over two campaigns but was unable to help them achieve promotion back into the Premier League.

Ayew has Premier League experience with both West Ham and Swansea which has led to him being tipped as a sensible signing for the Eagles, something that was discussed on HLTCO by host Dan Cook.

He said: “Another player that is being heavily linked with a move to Crystal Palace is Jordan Ayew’s older brother, Andre. He has, of course, been on the books at Swansea City over the last couple of years and has done relatively well, I believe he scored 15 or 16 goals for them in the Championship in back-to-back seasons.

“Of course, the Championship isn’t the same in terms of its competitiveness as the Premier League. He is well-versed in what it takes to be a Premier League footballer.

“If you factor in the emotional connection of Andre and Jordan being together at Crystal Palace, it may well work wonders for us.”

Considering last season, Palace had Michy Batshuayi and Jean-Philippe Mateta on loan and the pair managed to score a combined total of three Premier League goals, bringing in an established striker who has played in the top flight before for no transfer fee seems like smart business.

While Andre Ayew was not exactly prolific during his time spent in the Premier League, having a player that is fully adapted to the way of playing in England could be a huge helping hand for Patrick Vieira’s side.