James has been linked with a move to Elland Road in recent days, with reports claiming that the Whites are tracking the Welshman as United’s imminent signing of Jadon Sancho could push the ex-Swansea man out of Old Trafford. James was close to joining Leeds in January 2019.

Donnohue was talking about Leeds’ fresh links with James when he appeared on the latest episode of Leeds Live’s The Blue White and Yellow podcast. The journalist doesn’t see the Welshman getting into the current Leeds first team and doesn’t see the club meeting United’s asking price, either. 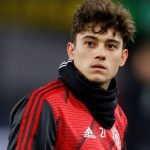 He stated: “Does Dan James even get in this team if he hypothetically did sign for Leeds? I think you’d be hard-pushed to find a Leeds United fan who’d say he would.

“The money that Man United would demand for him, given that he does have a contract for a few more years, would probably be around that £15 million mark at the minimum because that’s what they paid for. I don’t see him getting in this team, I don’t see Leeds paying £15 million for another backup winger.”

TIF Thoughts on James to Leeds…

Last season, James had a pretty impressive goal contribution per 90 minutes tally for Man United and that was also the case in the 2019/20 campaign. Not just that, he also thrives on pressing the opposition (as per FBRef). The 23-year-old also did well for Wales in the Euros recently, grabbing a decent WhoScored rating of 6.88/10.

So he’s clearly a very able player, but as things stand, Leeds have four options that can play on either flank – Raphinha, Jack Harrison, Ian Poveda and Helder Costa – so signing another winger may not make too much sense and perhaps, Leeds should focus on strengthening in other positions.