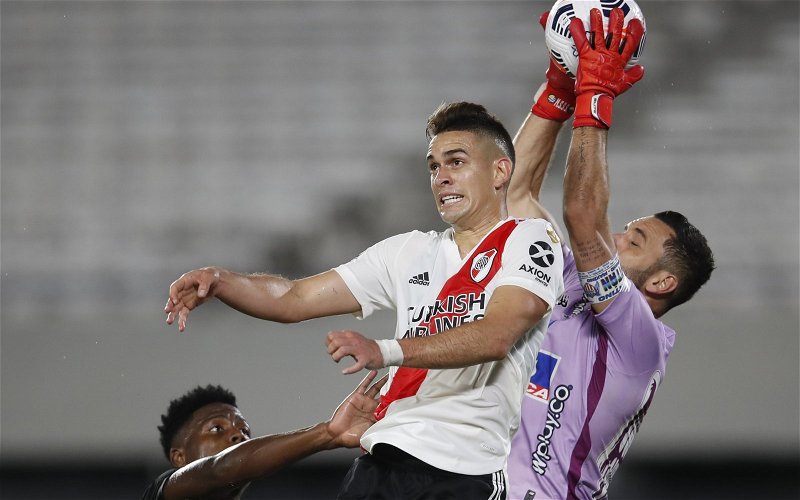 Journalist Ben Wild thinks that Rangers could be onto something of a coup if they could complete the signing of River Plate forward Rafael Santos Borre.

A recent report from Football Insider claims that Steven Gerrard’s men are showing an interest in the Colombian forward, who has scored 56 goals in 149 appearances for the Argentinian side and is set to be released from his club on a free transfer in two weeks’ time, although the club still value him as high as £15m.

It should be noted that Rangers do also face competition for his signature from Celtic, but given the state of the two clubs right now, you would probably lean towards Rangers being favourites to grab his signature.

Rangers may be seeking reinforcements as they prepare for a Champions League campaign at Ibrox next term and look to continue their resurgence under Gerrard, and speaking on a live video for Football Insider, Wild praised the idea of him making the move to Ibrox, claiming that getting a player of his supposed talent for free could be a great move:

“Admittedly, I don’t think any of us know too much about him. But looking purely at the stats, he does look like a very, very good prospect. There’s always a risk getting players from that part of the world, we’ve seen a bit of success with it for other clubs in the last few years.

“River Plate are one of the premier clubs over there, and you think if you’re a good player for them, there’s a pretty good chance he can be a decent player in Scotland as well. If he’s valued at £15m, any player valued at £15m you can take on a free is probably a good bit of business regardless, to be honest.”

Will Rangers win the league this season?

This deal, if they are able to pull it off, does come across as something of a risk-free move for Rangers. If he doesn’t manage to adapt and put up the same numbers that he has in Argentina, then they haven’t lost out big-time financially over him.

But if he is able to make a success of things and help the club, then they’ll have some added firepower to their squad ready for the season ahead.

And at the age of 25, there’s still plenty of opportunity there for them to sell him on and make a nice bit of profit on the deal to reinvest if they decide to go down that route.