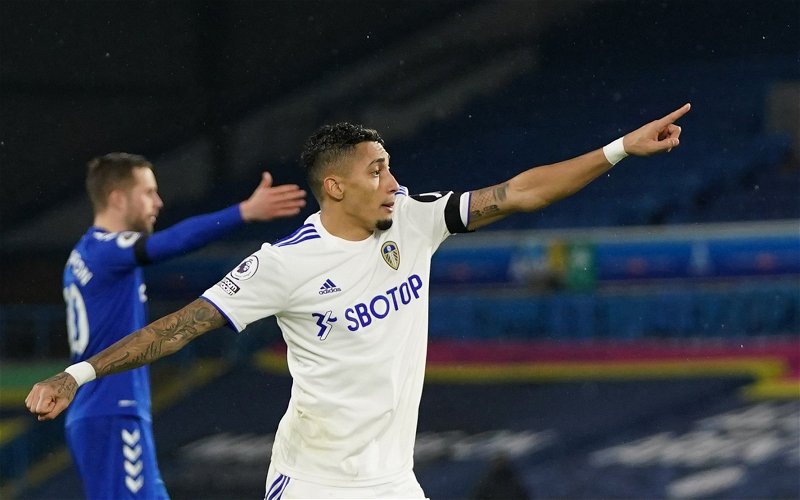 Many fans of Leeds United have taken to social media to react to the latest news and rumours surrounding their football club.

The image, posted on his Instagram story, appeared to show Raphinha promoting the upcoming Premier League season with Marcelo Bielsa’s side, potentially dismissing any speculation linking him with a move away from Elland Road.

Raphinha has been linked with an exit this summer, with the likes of Liverpool reportedly interested.

“He doesn’t want to leave.”

“Bit suss if you ask me? Not very clear 3 out of 4 Landmarks are Ldn”

“I know it’s been lockdown and he hasn’t been able to see much of Leeds but someone better tell him that Big Ben isn’t in Yorkshire.”
@jlongstaff_
“Well time will tell, I would not take this as cast-iron proof that he will stay”
@BraheTyke
“Maybe he fancies Brentford”
@JStukka
“Yes a lot of London. But also Elland Road is in the picture at the bottom Why would he post if he is actively looking to move.”
@Daz_Binks1

The reactions from the many Leeds fans who replied to the tweet vary. Some believe his post is the Brazilian star confirming he will be at Elland Road next season.

However, less optimistic Whites fans have been left worried by the inclusion of some famous London-based landmarks, with few speculating if he will ever pull on the Leeds shirt again.

Wherever Raphinha ends up next season, he will be a great addition to any forward line after proving his Premier League quality in his debut season in the English top-flight, where he finished with six goals and nine assists.