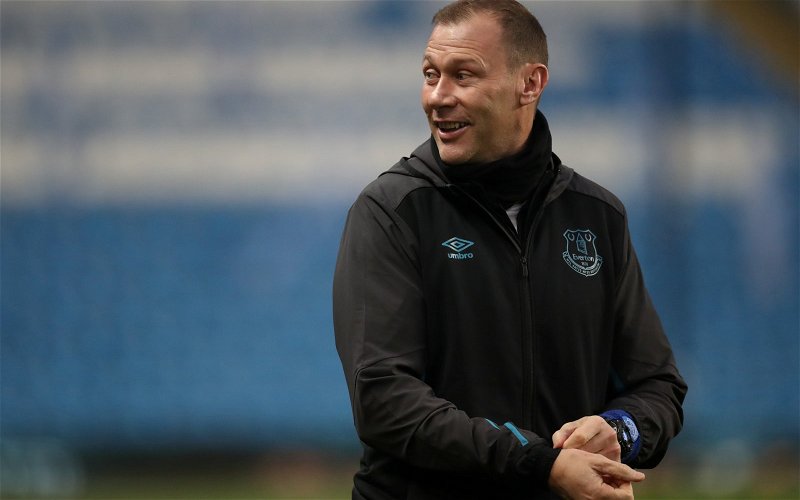 Everton podcaster Peter McPartland has been sharing his thoughts on the possibility of Duncan Ferguson being named as the new permanent manager at Goodison Park.

This comes after McPartland made an appearance on a recent video from the Toffee TV YouTube channel where he spoke about the current vacant manager position at the Merseyside club after Carlo Ancelotti recently left for a return to Spanish club Real Madrid.

On the subject of who could potentially be appointed as Ancelotti’s replacement, McPartland had this to say about why he thinks the job hasn’t already been given to Ferguson. (45.34)

He said: “I just don’t think at this moment they obviously feel like he’s got the experience or got the name to carry us forward to what they want.

“He’s a gamble I think as well, he’s a gamble. I don’t think that’s what they want at this stage.”

Ferguson was a part of Everton’s coaching staff under Ancelotti when the Italian was appointed at Goodison Park back in December 2019.

Given how Ferguson’s only real top-level coaching experience is from managing Everton as a caretaker during the period before Ancelotti was appointed, this shows that it probably would be a bit of a surprise for the club to pick him as the permanent boss – especially as the likes of Rafa Benitez and Nuno Espirito Santo have been linked.

And considering how he is hardly an unknown amongst the Everton hierarchy, you would have thought more noise would have been made by now if he were to stand a chance ahead of those currently being linked with the job.

However, the length of time it is taking to secure a replacement for Ancelotti is evidently giving some pause for thought, as Ferguson would clearly be a quick and temporary fix.

Should Everton give Duncan Ferguson the manager role?

In our view, while Ferguson obviously has knowledge of the club, the staff and the players, we feel that he would be better off continuing his role as part of the coaching team and helping whoever the club brings in rather than being the main man in charge.

In other news: ‘I can tell you’ – Fabrizio Romano reveals Espirito Santo claim amid Everton rumours