Arsenal insider Charles Watts has offered his views on the future of Arsenal goalkeeper Bernd Leno.

The German stopper, valued at £19.8m on Transfermarkt, is facing a very uncertain future at the club right now. The Gunners are reportedly making a move for Ajax goalkeeper Andre Onana, although that move is now facing some jeopardy as there appears to be rival bids coming in for the Cameroonian’s services.

Leno has previously stated that he is happy at the club but at the same time wouldn’t be against moving away at some point in the near future, so that also has to be factored into the equation.

Watts discussed the goalkeeper situation on his show, where he broke down the impact that signing Onana would have on both players should the move be completed:

“Onana doesn’t want to come in and be a No 2, even if he starts the season in November. He doesn’t want to then spend the next six months sitting on the bench behind Bernd Leno. And so you’ve got to decide if you’re Arsenal what you’re going to do.

“Are you going to look to move Bernd Leno on so you can sign Onana this summer? Have you got takers for Bernd Leno? Are people knocking on the door at the moment asking for Bernd Leno?

“As I’ve reported before, I don’t think anyone’s going to stand in anyone’s way if it is decided that Leno might well go this summer. I think he’d be open to moving; he’s admitted previously that he’s actually pretty much open to anything.

“If Arsenal got a good amount of money in for Leno – two years left on his contract, no talks started over extending that – yeah, I think they would accept it. But has that happened yet? I’m not so sure. And so I think you’ve got to weigh that situation up. And then you’ve also got to weigh up who’s your No 2 goalkeeper at the moment.”

Will Leno leave in the summer? 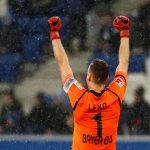 So there certainly is a lot to sort out when it comes to the German’s future, and Arsenal really need to be proactive when it comes to it rather than waiting for other clubs to make a move on their behalf.

It looks pretty clear that the club don’t see a future for him, otherwise they wouldn’t be chasing Onana in the first place. And if they are confident in getting that deal over the line, then they should be calling up everyone to try and shift Leno, even if they have to take less than what they think he might be worth – it would save a lot of tension boiling up in the goalkeeping position.