A lot of Tottenham Hotspur fans have taken to Twitter to vent their anger at the North London club over their latest tweet.

Spurs ended the 2020/21 Premier League campaign in seventh place following their victory over Leicester City on the final day of the season. 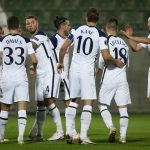 The three points also secured the Lilywhites a spot in the newly formed Europa Conference League.

However, it was the latest tweet from the club which really got their fans frustrated in relation to their 2021/22 home jersey which was revealed on Monday morning.

The tweet promoted a collaboration with Cadbury advertising a limited edition chocolate bar that the first 1,921 fans would receive if they bought the new shirt, but it’s fair to say it didn’t go down well.

“These lot will do anything to make us give them money”

@_JosephxThfc2_
“Levy thinking a chocolate bar will buy us back”
@tiagobasques
“No thanks.”
@whatfamm
“Levy looking behind the sofa for some cash to get Poch back I see”
@iSimplyKane
“You want to squeeze more money out of us, why am I not surprised”
@lUKE_c0ys
“Embarrassing”
@tr17___
“Smells of desperation.”
@Monkeyaround19

Tottenham remain without a permanent manager as the end of the 2020/21 season also marked the end of Ryan Mason’s temporary tenure of the first-team.

Going by the reaction of these Spurs fans it is clear the tweet did not impress them in the slightest amid their current frustration with the Tottenham board.