West Ham have recently been linked with a move for Aarons, with reports claiming that the Hammers have emerged as candidates to sign the Englishman with Norwich demanding a fee of £30 million to let the right-back leave (as per The Independent).

The report has stated that Aarons has been told that he can leave Norwich in the summer, with Tottenham also said to be holding a long-term interest in the defender. Manchester United have also drawn links with the England Under-21s man.

Do you think West Ham signing Aarons is a possibility? 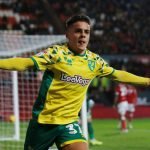 McAvennie was talking to Football Fan Cast recently and he believes that West Ham moving for Aarons doesn’t make sense.

He said: “I don’t know if they’re going to sell the boy, but £30million for someone in the Championship is a bit much, because he might not do it in the Premier League.

“I don’t know if West Ham would want him because they have Coufal, and Fredericks and the boy Johnson can step in there as well. So, it’s a strange one, they’re not going to drop Coufal, he’s been a wonderful signing, so I don’t get why they would pay £30million for him to sit on the bench.”

Only four West Ham players have picked up a better rating than Vladimir Coufal in the current season and the 28-year-old has racked up a tally of six assists as well (as per Whoscored). Ryan Fredericks has also contributed to a couple of goals, while playing only as a back-up.

This shows that David Moyes’ men do have some options in that position and that might make it tough for Aarons to break into the side. Because of that, it might be better for the 21-year-old to move to another club.

In other news: ‘David Moyes likes that’ – West Ham told to launch move for £16.2m-rated star