Exclusive: Pundit claims Eddie Howe could be a good fit for Crystal Palace

In an exclusive interview with This is Futbol, Steve Howey, who made 278 appearances during his career, has claimed that Eddie Howe wouldn’t be a bad appointment if Crystal Palace decide to move on from Roy Hodgson.

Hodgson was appointed as Frank de Boer’s replacement in 2017 and since then he has managed to keep Palace away from any threat of relegation all while dealing with constant Wilfried Zaha speculation.

Who should Eddie Howe join? 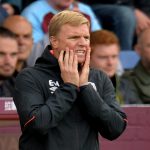 Howe had reportedly held advanced talks with Celtic last month to replace Neil Lennon but after his representatives came out and said he would not be considering any jobs until at least the summer they appear to have held more talks with Roy Keane.

Speaking on how Palace appointing Eddie Howe wouldn’t be a bad choice and how it’ll be interesting to hear what ex-Eagles chairman Simon Jordan has to say about the links, Howey exclusively told This is Futbol:

“There are rumours about Roy Keane and Celtic so it’ll be interesting to see what Eddie Howe does. I feel that’s not a bad fit for him to go to Palace so we’ll just have to wait and see.

“I think it’ll be interesting to see what Simon Jordan has to say about that on talkSPORT.”

The 43-year-old has been out of work since he left Bournemouth at the end of the 2019/20 season as he couldn’t keep the Cherries in the Premier League.

If he was to replace Hodgson then he would be bringing a totally different style of football to Selhurst Park as he was very attack-minded at Bournemouth, whereas his manager senior has been pragmatic and solid at the back.