Celtic: Ex-defender reveals he was approached for Parkhead return | thisisfutbol.com

Celtic: Ex-defender reveals he was approached for Parkhead return

Former Celtic defender Johan Mjallby has recently revealed that he was approached to return to Parkhead by Neil Lennon.

Mjallby was one of the guests on the latest episode of The Celtic Huddle podcast and the panel talked about multiple issues involving the Bhoys. Mjallby gave his opinion about numerous aspects at Celtic and he was asked about whether he has been close to returning in the past. The former Sweden defender revealed that former manager Neil Lennon had tried to bring him back in an assistant capacity but a potential move fizzled out.

As a player, Mjallby was at Parkhead for up to six years. He joined the club in 1998 from Swedish club AIK and departed Scotland in the summer of 2004, when he joined Spanish side Levante. He re-joined AIK later in his career before retiring in 2006 (as per Transfermarkt).

Should Celtic have allowed Mjallby to join Lennon? 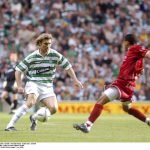 After his playing career ended, the Swede became an assistant manager under Neil Lennon from 2010-2014.

The former defender revealed that while Lennon wanted him back when his second stint began after Brendan Rodgers left, he seemed happy with his assistants already at his disposal.

Mjallby said: “We had a brief chat about it when he got into the door. He was interested to try and bring me on but that fizzled out a wee bit which was fine. We don’t usually pick up the phones to chit-chat. Unfortunately, in this pandemic, we’ve not been able to see each other in person. I think he was quite happy with his assistants.”

Neil Lennon left Celtic earlier this year when the Hoops were 18 points behind Rangers in the Premiership table.

John Kennedy was part of his staff, but the Scotsman has been at Parkhead over the last many years. Gavin Strachan came in more recently. Damien Duff had been part of Lennon’s staff, which shows that he was his chosen person.

This suggests that Lennon perhaps didn’t have his own selected coaches alongside him and it is understandable why he wanted Mjallby with him.

In other news: ‘Would be unreal’, ‘Be colossal for us’ – Many Celtic fans excited as news emerges