Tottenham Hotspur fans have been reacting to the performance of Serge Aurier during their game against Everton.

The game is pretty much the definition of a six-pointer, with both teams desperately hanging on to their hopes of qualifying for the Champions League, with a loss for either side likely to put them really behind the eight-ball heading into the final few weeks of the season.

That message of urgency, at least according to the fans watching at home, didn’t seem to resonate with the Ivorian defender, as fans were quick to jump on his back for his display in the opening period. Some fans incredibly angry at his lack of ability to keep hold of the ball, which was reflected in the number of passes that he allowed to go astray:

“Aurier lost the ball the twice inside 6 mins. This is going to be a long long match”

Is Aurier Tottenham's best right back? 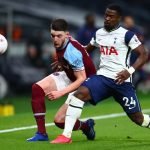 Let’s just see if his performance picks up in the second half, for Spurs’ sake as much as his own.

In other news: ‘Another Poch mistake’, ‘He was the answer’ – Many Spurs fans flock to Alasdair Gold’s post