Leeds United: Fans react to Alfie McCalmont’s numbers whilst out on loan at Oldham Athletic 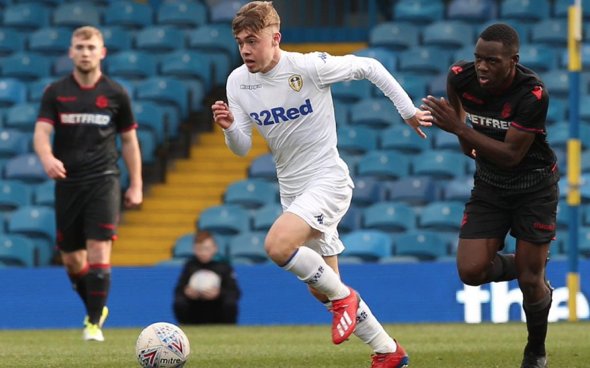 Leeds United fans have been reacting to the latest updates regarding loaned player Alfie McCalmont.

The 21-year-old has spent this season on loan with League Two side Oldham Athletic and has put up some pretty decent numbers, with ten goals and three assists across the whole campaign including a recent flurry where he has bagged five goals in the space of nine games.

These stats were relayed to the fans via the Leeds Twitter account, along with footage of a rather impressive goal that he scored against Harrogate Town, and it led to plenty of supporters swooning over his talent and what he could offer the club in the future:

@LUFC_is_life
“He’s on fire at the minute and had some great goals”
@russcausier
“Been a great loan spell this”
@omicdaz
“Best one of the lot. Unbelievable technique.”
@Mr_Tasker
“Only scores bangers does the lad”
@Ki3ranhutchinso
“Channeling his inner Yeboah”
@G4moore
“Creating his own goal of the season competition at Oldham – good lad!”
@mikesamlawson
“With a record like that maybe need him in the first team!”
@designerhomes
“Far too good for that level”
@BatesyV5

Do you think Alfie McCalmont has what it takes to break into the Leeds first team next season?

It certainly has been a brilliant year for the young players at Leeds United, with the U23 side recently claiming the Premier League 2 Division 2 crown, but it’s whether or not Marcelo Bielsa has been left impressed enough to give them a chance next season that is the really interesting part in all of this.

In other news: ‘Could not love him more’ – Many LUFC fans in love with Marcelo Bielsa’s ESL comments