Many Leeds United fans have been reacting to the latest injury news to come from Marcelo Bielsa.

Leeds United are getting ready to play Liverpool on Monday night at Elland Road in a game that doesn’t really mean all that much for the home side given their comfortable place in mid-table, but it will have an awful lot riding on it for the visitors as they look to qualify for the Champions League.

Even so, after the season that Leeds United have had, they should be looking to end it on a high, and proved with their win at Manchester City last week that they aren’t in holiday mode just yet.

However, they may have to do without one of their key men on Monday night, as Bielsa revealed in his press conference (via @PhilHay_) that Raphinha is a doubt for the game following a knock he sustained against Manchester City, which has left a lot of fans devastated: 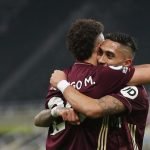 These responses seem pretty justified, as the Brazilian has arguably been one of their better players this season, topping their WhoScored ratings after registering six goals and six assists this campaign.

In other news: ‘I get the impression’ – Phil Hay drops big Bielsa contract claim at Leeds