Fans of Celtic have been reacting to a post on Twitter, in which the club confirmed the signing of Liam Shaw on a pre-contract agreement.

In the post, Celtic stated that they were “delighted” to confirm that the Sheffield Wednesday left-back had finalised a pre-contract agreement with the club, before confirming that the 19-year-old will join up with the Bhoys on 1st July 2021.

So far this season, the defender has played a total of 15 Championship games for Wednesday, over which he has scored one goal and created two big chances, as well as making an average of 0.5 interceptions, 0.9 tackles, 1.7 clearances and 0.3 key passes per game, culminating in an average SofaScore match rating of 6.54/10.

And in reaction to the news of his signing, fans of Celtic flocked to Twitter to have their say on the matter, with many appearing delighted at the prospect of the young left-back joining their club this summer.

Are you worried about who sanctioned the signing of Shaw? 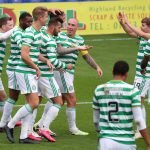 So, what exactly did these Celtic fans have to say in reaction to the news regarding Liam Shaw?

“Massive step up for the youngster but looks a very good prospect.”

“This is really the content I signed up for.”

“Some positive news at last.”

All in all, it would appear as if these Celtic fans are delighted with the club’s landing of Shaw, with many stating their belief that this type of signing is much more like it from their club, and, considering the performances of the left-back for Sheffield Wednesday this season, the 19-year-old certainly does appear to be an exciting prospect.