A lot of Celtic fans have flocked to Twitter to respond to the latest tweet from Christopher Jullien showing the player’s rehabilitation efforts following his long-term injury.

The Frenchman suffered the knee injury on the final game day of 2020 whilst clearing a shot off the line, however, it was confirmed by Neil Lennon he would be expected to be out of action for six-nine months.

Celtic signed the defender in the summer of 2019 from French side Toulouse for a fee believed to be in the region of £7m (via Transfermarkt).

The £4.95m-rated 28-year-old’s latest tweet showed him with one of his rehab machines and the Celtic faithful were quick to voice their support for the defender.

“Hopefully see you back to your best soon”

@morrisonjoseph8
“Just you get fit big man and get back for next season in the Hoops! I hope you want to still be here”
@garydg7
“Hurry back big man. We need you”
@JohnFearon4
“He’s been our biggest miss this season.”
@jingscriven

A couple of fans even mentioned Roy Keane, who has been linked with the vacant Celtic job. Jullien would perhaps be running a fine line with a jokey tweet with Keane around as he’s certainly been known to take up a no-nonsense approach.

Has Chris Jullien been a huge miss? 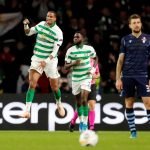 The French defender had only made nine appearances for Celtic this season in the league before sustaining the injury after suffering from a back injury after the first few weeks of the Scottish Premiership season.

All in all, Celtic’s failure to lift their 10th consecutive Scottish crown this season will have their fans scratching their heads as to what went wrong and it is apparent to see they feel Jullien was a huge miss for a lot of this season.