Tottenham Hotspur fans have been reacting to some news about Sergio Reguilón ahead of their game with Newcastle United.

The Spanish defender has had to spend a large part of the season battling it out with Ben Davies to be the club’s starting left-back, but seems to have pulled ahead of the Welshman in that department over the course of the campaign.

However, according to a report by Sky Sports, his status for the upcoming game against Steve Bruce’s side this weekend is ‘doubtful’. Given the importance of the game with where Spurs are in the table, it certainly isn’t the best of news for supporters to be greeted with so close to the game, which is why they were so furious, both at him and the club when the news reached them on social media:

“Ayo I hate it here”
@thfcmooooo
“We’ve lost”
@Nico0neson
“Uuugggghhhhhhhh”
@Macaully_Moffat
“Nah I’m done”
@derrickRAMrOSe
“He gets injured a bit doesn’t he”
@happy_spursfan
“Jesus another player always injured”
@ryan__thfc
“Heh. Like Reggie But find the willingness of Spurs supporters to look past his frequent injuries, while banging on Lo Celso, to be a bit hypocritical.”
@MysterBurns

Does Tanganga deserve to play more? 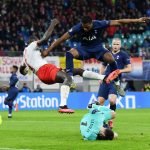 It’s certainly a race against time at this point, and with Davies also currently facing some injury problems, Jose Mourinho could be forced to get drastic with his choices.

In other news: ‘He knew that’ – Gary Mabbutt drops positive Spurs claim as ‘statement’ emerged