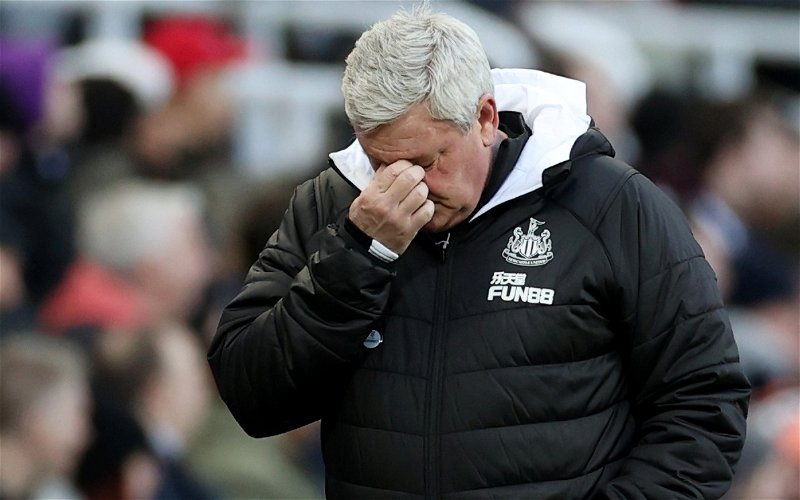 Newcastle United fans have taken to Twitter to react to an article by Craig Hope claiming there has been a bust-up between at the Newcastle training ground.

It was claimed in Hope’s article for the Daily Mail midfielder Matt Ritchie and manager Steve Bruce had a clash of words in Tuesday’s training session which saw Ritchie call Bruce a “coward”.

The Magpies are sitting just above the relegation zone with a rejuvenated-looking Fulham just three points behind them in 18th place.

It is believed the pair clashed as a result of their draw to Wolves on the weekend with Bruce reportedly blaming Ritchie for the away side’s equaliser.

A lot of Newcastle fans have expressed their opinion on Bruce’s position as manager in the past, however, this reported event has ignited further contempt for the 60-year-old boss.

“Damning. As hopeless a manager, I’ve seen at SJP in 40-odd years as a supporter. The whole thing is rotten to the core. If he stays, the Championship beckons.”

@DaveSMorton
“Wow, surely he’s gone now? please get rid before WBA, we need the “new manager” boost now! Jones will save us!”
@Toonern
“Sack him now. Give Jones the job. We don’t want a team that’s not going to fight for the manager. Sack him now.”
@Ethcommon
“If this is true there’s no going back. Bruce is clinging on for a payout. Unprofessional, shameful, embarrassing running of a football club. As for Bruce, I hope he never gets another job in football.”
@ColmRose94
“Poor from everyone concerned. Not sure why so many people are celebrating this?“
@Luke9S

“This is much worse than a bust-up with the Longstaffs or ASM. Ritchie is a leader in the dressing room, a senior pro respected by other players. How can Bruce come back from this?”

@HoltzvonHoltzer
“Great news this! Fair play Ritchie. About time someone pulled him up on his “never my fault” narrative. Pushes him closer to the door. When we lose at West Brom (& I really think we will) surely then he has to go.”
@carl_greener
Things seem to be going from bad to worse for Newcastle fans and given their situation in the league table this is the last thing they will have wanted to read. There have been reported rumours of previous bust-ups at Newcastle earlier this season, but this one seems particularly damaging.
Give us feedback