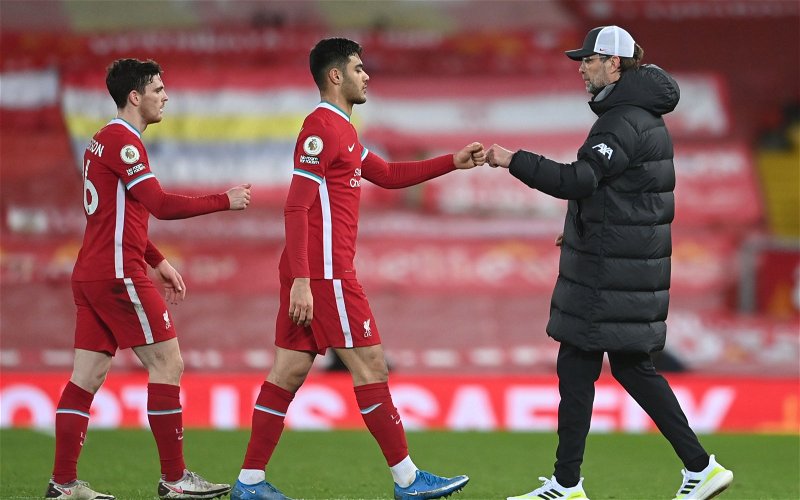 Duncan Castles has been speaking on the latest edition of The Transfer Window podcast about news from all around Europe.

One of the clubs that he spent a lot of time on was Liverpool and, in particular, their signing of Ozan Kabak.

The Reds signed the Turkish international to cover for the injured Virgil van Dijk, Joe Gomez, and Joel Matip.

He arrived on loan until the end of the season, with the Reds having an option to buy; however, he has struggled in the Premier League, earning a 6.47 rating from WhoScored from his four league appearances.

In the Champions League, he has been better, earning a 7.27 rating on average from his games against RB Leipzig.

However, it seems as if some experts were not convinced that Kabak was the right signing for Liverpool.

Castles said: “I talked to a couple of recruitment specialists when he was signed and they both said, ‘I don’t see him as being a Liverpool player, more a player for La Liga’ and a player who was performing for one of the bottom clubs in the Bundesliga.

“He’s put in, and he’s been exposed in a defence that was struggling to start with.”

Do you think Kabak is good enough?

Kabak’s Liverpool career may not have got off to the best of starts, and there certainly is some truth in Castles’ remarks, with Kabak at least partly responsible for the continuation of Liverpool’s downfall this season, having been directly involved in the defeat to Leicester City.

If he could replicate his performances in the Champions League in the Premier League (as per his WhoScored match ratings), then signing Kabak might look like a good piece of business by the end of the season.

However, if he keeps up his Premier League form, then the specialists could be right, and the 20-year-old might not be cut out for the English top flight.