Sky Sports reporter Tim Thornton has been speaking on the latest edition of Sky Sports’ Pitch to Post podcast about the situation at Sheffield United.

Last week the club announced that they had parted company with Chris Wilder, and Paul Heckingbottom was placed in charge until the end of the season.

His first game was a disaster as the Blades were thrashed 5-0 by Leicester City, and it seems as if the club are in no rush to appoint a successor, though Heckingbottom could have a chance if the Blades perform well for the rest of the season.

Thornton said: “I think long-term, it’s very much up in the air.

“Short-term, obviously, Paul Heckingbottom, while he’s in charge, he’s perhaps got a chance to stake his claim, he was the Under-23s manager.

“He did something similar actually at Barnsley; when Lee Johnson left Barnsley, he took charge there on a caretaker basis – he was the academy manager – and he did really well.

“They won the Football League Trophy, they got promotion, and he got the job on a full-time basis and then did really well at Barnsley and went on to Leeds. So, he’s very, very capable, is Paul Heckingbottom.”

Do you think Sheffield United will replace Wilder soon? 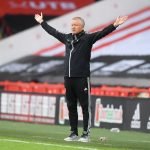 TIF Thoughts on the Blades’ search for a new manager…

Heckingbottom has only ever managed in the Championship, League One and SPFL before his first Premier League game against Leicester City.

His time at Leeds United wasn’t great as he only won four league games, so though Thornton thinks that he might see this as a chance to stake his claim, surely the board will be looking for someone else with more pedigree?

The truth is Wilder was probably the perfect man to help the Blades next season as they edge closer and closer to relegation, and now they must find someone who can replicate what Wilder achieved, which you would think could be difficult.

For now, we will just have to see how Heckingbottom does, but after that first game and given his record with Leeds; we are not confident he will do that well.