Many Leeds United fans have been discussing the club’s links with a move for Italian midfielder Tommaso Pobega.

Italian outlet Tuttosport (via FootballItalia) recently reported about Pobega, who is currently on loan at Spezia from Milan. The report states that the midfielder’s performances have been impressive and as a result of that, he is attracting interest from clubs abroad. One of those clubs is Leeds.

Should Leeds move for Pobega? 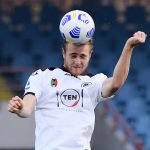 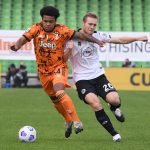 The report also links him with a move to Leicester City and Eintracht Frankfurt. This update about the links with Leeds was relayed on Twitter by journalist James Marshment. Many Whites fans made their views clear about the midfielder.

What did Leeds fans make of the links with Pobega?

“If he cant get in the Milan team then he ain’t good enough for Leeds.“

“Hadn’t heard of him before but a lot to like. Young but with Serie A (plus B & C) experience. Big & strong (6ft2). Genuinely 2-footed (knocking long passes effortlessly with both feet). Scores & can play a killer pass. Great tackler. Would be excellent cover for Kalvin & Klich.”

“Looks like he’ll do anything to avoid using his right foot. Let’s get a proper two-footed player.“

The report from Tuttosport has also stated that Pobega is currently ready to return to his parent club – Milan, even though Spezia have the option to buy him permanently in the future. Milan also possess the counter-option to recall him from the temporary stint.
It has been stated elsewhere that Pobega’s value has risen because of his performances for Spezia.
“Same birthday as me this lad, I think we should sign him for that alone. Also a 6’2 Italy u21 international who’d be free as his contract is up in the summer, but let’s not steer away from the important bit.“

The 21-year-old midfielder has made 14 appearances in Serie A for Spezia and he has already scored three goals. This shows his goalscoring ability as a central midfielder.
With Adam Forshaw still injured, Leeds have only Mateusz Klich and Jamie Shackleton as the two central midfield options, which might be suggestive of their need for a central midfielder. Pogeba can add depth to that position and since he’s still 21, he may still have room to improve in the future.