Supporters of Celtic have slated Australian attacking midfielder Tom Rogic for his performance in the stalemate with Livingston.

During the latest round of Premiership fixtures, the Hoops hosted the Lions at Celtic Park and the two sides played out a 0-0 draw (as per BBC).

Neil Lennon opted for a 4-2-3-1 starting formation against Livi, in which Rogic was played as the lone striker.

Operating behind the Australian in the advanced three was Jeremie Frimpong on the right, David Turnbull in attacking midfield and Mikey Jonhston on the left.

In the 80th minute of the clash, Rogic was replaced by Armstrong Oko-Flex (per Celtic).

During the game, though, lots of Celtic fans took to social media to slate the 28-year-old midfielder for his performance.

So, what did these Celtic fans have to say about Tom Rogic’s performance?

“Tom rogic today played like a Sunday league player who was the manager and turned up with 10 players and he had to play so they stuck him upfront. He was absolutely terrible today and ran his course at Celtic.”

When Rogic was removed by Lennon in the 80th minute, lots of fans flocked to the club’s tweet which announced the change to slate the Australian’s performance.

Is Tom Rogic good enough to play for Celtic? 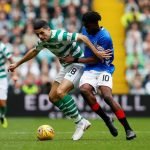 “Tom’s not bothered at all”

The £1.8m-rated attacking midfielder has now made 19 appearances for the Bhoys in all competitions so far this season (per Transfermarkt).

In those appearances, he has managed to score just one goal and provide only three assists for teammates.

Perhaps it was no surprise that the Parkhead faithful were left frustrated after the draw with Livingston, though, as the point saw the club’s Old Firm rivals maintain a 20-point lead at the summit of the Premiership (per BBC).

“Tom Rogic has to be the most overrated Celtic player ever. A few good goals and the fans think he is Rui Costa.”

As can be seen in these responses from Celtic fans, many of them were frustrated with Rogic following his performance in the 0-0 draw with Livingston.