Fans of Tottenham Hotspur have taken to Twitter in order to criticise the first-half performance of Spurs centre-back, Eric Dier.

Having made one of Tottenham’s centre-back spots his own this season, missing just one Premier League game for Jose Mourinho’s side, Dier has impressed over his 16 league appearances in the Spurs defence, making an average of 0.4 tackles, one interception and 5.6 clearances per game, while averaging a WhoScored match rating of 6.77 – ranking him as the club’s 10th best performer in the top flight, prior to the Sheffield United game.

However, following the £22.5 million-rated 27-year-old’s performance in the first half of the Sheffield United clash, these fans of Tottenham appeared less than pleased with Dier’s display, with many questioning how the England international gets in their team every week.

Should Dier start at centre-back for Spurs? 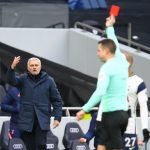 So, what exactly did these Tottenham Hotspur fans have to say about Eric Dier’s first-half performance?

“Dier can’t jump he can’t pass either. He also can’t defend. He will start week in week out though”

“Name another top 6 side Dier starts for. Would rather have Maguire lol he doesn’t lose out in the air.”

“So dier can win headers in their box but not ours?”

“He’s been good this season but when eric dier is your main defender its a big problem.”

“Why would you pick Dier over Alderweireld??? Absolutely baffling”

“Hard to watch dier atm …looks out of shape and awkward”
@ShaunLewis17
“Dier got his concrete boots on today? Looks like he is pulling a caravan every time he is in a 1 v 1 sprint”
@Spurs2380

All in all, it would appear that the vast majority of these Tottenham fans were less than pleased with Dier’s first-half display, with some stating their belief that the defender has been awful, while others suggested the centre-back would not get into any other top-six team.