Many Celtic fans have been talking about an update involving Odsonne Edouard that recently emerged on social media.

The Daily Record have recently reported that while Milan and Juventus have been linked with a move for the French striker, the Bhoys have reached an agreement with Edouard’s representatives that he will be let go before his contract expires in the summer of 2022. The Hoops are hoping to get a fee of around £30 million to part ways with the former Paris Saint-Germain man.

Should Edouard get sold in January?

More than that, Celtic have also made it clear that Edouard won’t be leaving the club in January, with the Hoops looking to win their tenth title in a row. This update was relayed on Facebook by Read Celtic and many Hoops supporters made their opinion clear about Edouard.

What did Celtic fans make of this update about Edouard? 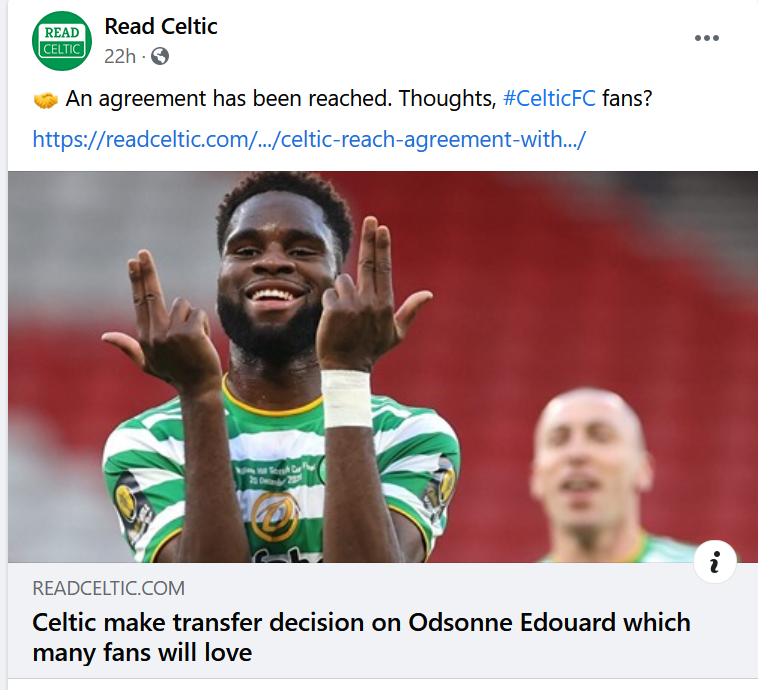 It was previously reported that Juventus saw Edouard as a back-up option for Alvaro Morata and Milan, in their chase for a back-up for Zlatan Ibrahimovic, see Edouard as one of their options.

In the summer transfer window, Edouard was linked with a move to the Premier League, as clubs like Aston Villa, Crystal Palace and Leicester City had drawn links with a move for him. Some other Celtic fans also discussed the latest update about the 22-year-old.

Edouard has scored seven Premiership goals for the Bhoys, while picking up four assists. In all competitions, he has found the back of the net 11 times so far (as per Transfermarkt).

This shows that he has had a decent season and he is also Celtic’s highest-scorer in the league. This shows the importance he carries for the Bhoys and if Celtic want any chances of winning the title this season, they might have to keep Edouard. So instead of criticising him, Celtic fans should be glad that he’s staying at the club in January.