On the latest video for his YouTube channel, Football.London journalist Alasdair Gold has been discussing the latest goings-on at Tottenham Hotspur, reflecting on the 3-0 friendly win against Ipswich Town, and sharing his thoughts on some of the transfer business that could still be done by the North London club this summer.

One topic of discussion on the recent video was the latest news on Serge Aurier. The former PSG man has been heavily linked with a move away from the North London club this summer, with AC Milan looking like the favourites to sign him. However, the likes of Bayer Leverkusen and AS Monaco have also seemingly registered an interest in the Ivory Coast international.

Here’s what the journalist had to say about the 27-year-old defender during the video:

“It feels like Serge Aurier’s heading out the exit door. Everything points towards that. He wanted to leave last summer, AC Milan are interested in him and seem to be approaching the end game of getting him. There’s other clubs interested as well, which Spurs will be delighted about. I’ve seen links with Leverkusen, Monaco, and all of that puts pressure on AC Milan to get the deal done.”

It had seemed as if AC Milan were some way off Spurs’ asking price for Aurier, but Gold certainly feels as if the interest from Leverkusen and Monaco may encourage the Serie A side to get the deal done shortly.

Will you be happy to see Aurier leave? 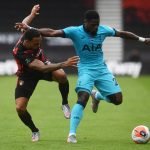 It is perhaps a surprise that Spurs seem willing to let the Ivorian go, considering he was Spurs’ third-best performer in the Premier League last season, and they also have a lack of options at right-back following Kyle Walker-Peters’ move to Southampton, but from what Gold has to say, he won’t be a Lilywhites player for much longer.