Liverpool: Jamie Carragher believes Chelsea and Manchester United ‘will be a lot closer’ to Liverpool next season 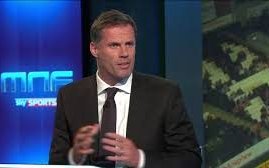 Ex-Liverpool defender and current Sky Sports pundit Jamie Carragher joined Paddy McKenna, Dion Fanning, and Nooruddean Choudry on a recent edition of The Football Spin where he discussed all things Liverpool and at one point during the show, the 42-year-old revealed that he believes both Chelsea and Manchester United “will be a lot closer” to Liverpool in next season’s Premier League.

Liverpool ended their 30-year title drought this season as they stormed to a dominant Premier League title win. Ahead of the final day of the 2019/20 Premier League season, the Reds have got an 18-point lead over their nearest challengers, Manchester City.

However, when asked by Fanning if he sees “any other title challengers for next season” apart from City, Carragher took the opportunity to state that he is not ruling out the possibility of Manchester United and Chelsea mounting a title challenge next season.

The ex-Reds defender said: “The two you look at is obviously Chelsea and Manchester United, [they have a] great history in winning it. It remains to be seen with Chelsea because they’re buying a lot of players, you just don’t know how they’ll settle or how they all fit into the team.

“They definitely need a top goalkeeper, possibly both teams if I’m being totally honest, but certainly Chelsea.

“Manchester United’s an interesting one with [Bruno] Fernandes, I think he looks brilliant. Every time I see him, I love watching him play and he just has totally, I feel, transformed that team, really. So, I think those teams will be a lot closer.”

Which club do you think are more likely to challenge Liverpool next season?

Manchester United have been on a positive run of form of late and they are currently unbeaten in 13 Premier League games heading into their final game of the season.

Meanwhile, Chelsea have already been active in the transfer market prior to the official opening of the 2020 summer transfer window, securing the signings of both Hakim Ziyech and Timo Werner for a combined total of £83.7m.

With all of that in mind, it may be understandable why Carragher has named these two clubs as potential title challengers heading into the 2020/21 campaign, especially as it has been reported that Liverpool are set to have a quiet summer transfer window and that may allow other clubs to make up some ground on the 2019/20 Premier League champions.