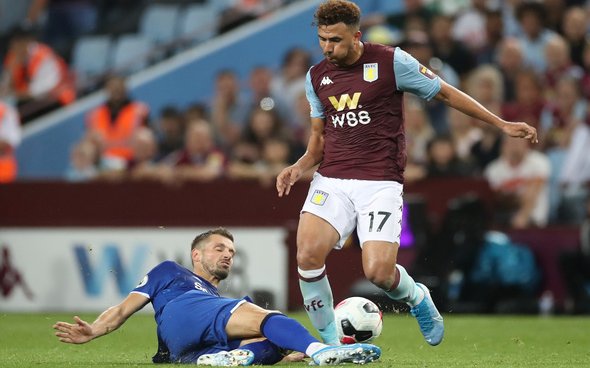 Aston Villa fans have taken to Twitter to respond to the latest transfer rumour linking winger Trezeguet with a move away from Villa Park.

This comes after Villa fan Twitter account @villareport shared a post on their page relaying news originally published in Fotospor that Turkish club Besiktas have made Trezeguet a “priority target” this summer.

Would you be happy to sell Trezeguet this summer?

This post then gathered a lot of replies from Villa fans who were eager to share their thoughts on this latest transfer rumour.

Be?ikta? have made Trezeguet a priority target. [fotospor] #avfc

Sell all day long nowhere near fit enough for prem, we need pace in wide areas big time, too slow and predictable. That formation requires pace on both sides with Jack n Mcginn in middle 3

Good. He’s not good enough. Apart from the goal in the semi final he’s pretty much flattered to deceive.

I’ll drive him to the airport

The Egyptian, who is currently valued at £9 million according to Transfermarkt, joined the Birmingham club in the previous summer transfer window for a fee of £9 million from Turkish club Kasimpasa (per Transfermarkt). Since arriving at the club, the 25-year-old has only managed to score four goals and provide three assist in 31 appearances in all competitions for Dean Smith’s side.

However, despite this poor goalscoring form, it was Trezeguet’s last-minute winner that saw Villa beat Leicester City in the Carabao Cup semi-final second leg in January to earn their place in the final. Now that it has been reported that Besiktas are interested in bringing the winger back to Turkey, a lot of Villa fans have been getting excited by this latest transfer news.

That deal should happen he doesn’t have a brain

That’s great news. Get our money back and wish him well.

Although Trezeguet may not have been a consistent goal threat during his time at Villa Park, it does seem quite harsh how these Villa fans have reacted to the idea of the club letting the winger go.