Some Bristol City fans have been sharing their joy on social media following the latest update on Benik Afobe’s fitness.

Afobe originally joined the Robins in August last summer on a season-long loan deal from Stoke City. The centre forward hit the ground running upon his arrival at Ashton Gate, scoring three goals in his first five Championship games for Bristol City. The Robins were undefeated in all five Championship games in which Afobe featured for them this season, winning three and drawing the other two.

However, Afobe’s impressive start with the Robins was abruptly ended when he was struck down with an anterior cruciate ligament injury in September. Initial reports claimed that the injury would see the Democratic Republic of Congo international miss the remainder of the season.

In addition to his positive first five games with the Robins, Afobe further endeared himself to the Bristol City faithful during his time on the sidelines as he joined some of them in the away end at Loftus Road earlier this month. 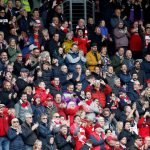 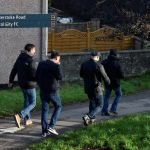 Afobe and wells up top?

Xcellent. Be nice to have him on the bench for the last few matches.

Some Robins supporters have called for the club to sign Afobe permanently, upon hearing the news that he is set to return from injury.

Let’s buy him, seems to love being around the club and he’s a goal scorer

Meanwhile, they scored the remaining 38 of their 48 Championship goals this season over the 28 games in which Afobe didn’t feature. This averages out to 1.36 goals per game without Afobe in the team this season.

Transfermarkt.co.uk values the 27-year-old at £7.2 million. It may be inevitable that the absence of a valuable centre forward, who was performing for the club as Afobe was with Bristol City, would negatively impact the team’s performance. Should Afobe return to the Robins’ squad before the end of the season, he may help them in their push for a play-off place.