West Bromwich Albion are said to be one of a number of clubs chasing non-league striker Ronald Sobowale.

The 22-year-old currently plays for BetVictor Isthmian South East Division outfit Whyteleafe and is currently midway through a trial at Middlesbrough.

According to The Daily Mail, Leicester City, Watford and Fulham have also joined the Baggies in the race to sign the London-born forward as he looks for a professional deal in English football.

His uncle is the father of Bayern Munich’s Champions League-winning left-back David Alaba.

Sobowale’s form for Whyteleafe this season has been sublime, with the striker netting 10 goals in 11 matches for the Surrey side, according to the Leicester Mercury.

One Whyteleafe regular said back in August on Twitter that Sobowale was ‘far too good for this league’.

Whyteleafe starting the season off well again. Just seems only a matter of time before some of the better players disappear like usual especially Ronald Sobowale who got a hat trick today and looks far too good for this level!

He has had trials in the past with Brentford, Cardiff City and Barnsley, the latter of which he started a Premier League 2 match for.

TIF Tactics – is Sobowale the answer?

News reports have been emerging for different clubs being interested in Sobowale’s services for a year now, so you have to wonder why no club has yet to take a punt on him.

His goal return this season, albeit in the non-league, has been very impressive with 10 goals in 11 games.

West Brom also are in need of a striker who can get them goals, with all three strikers in Kenneth Zohore, Hal Robson-Kanu and Charlie Austin not finding the net as often as they should have this season. As detailed by WhoScored.com below, all three strikers are not getting enough shots away per game and it’s reflecting heavily on their goal tally. 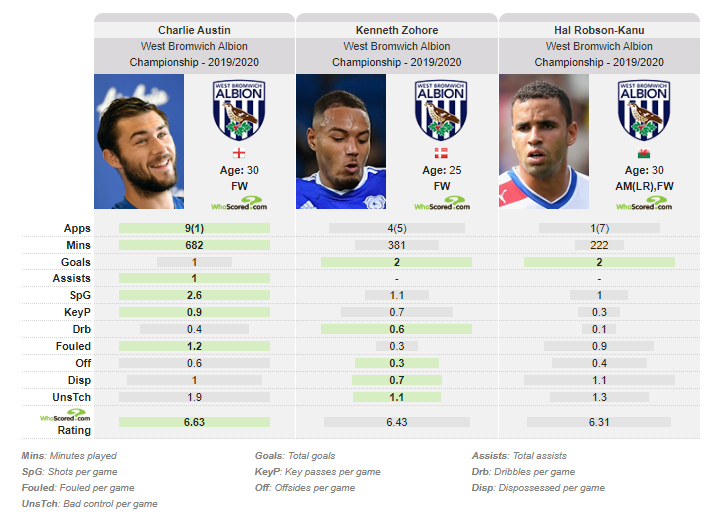 So a move for Sobowale would come with little risk attached. His wages will be small, there will be little or no transfer fee involved and he wouldn’t be relied upon so heavily as his competitors for a spot in the team.