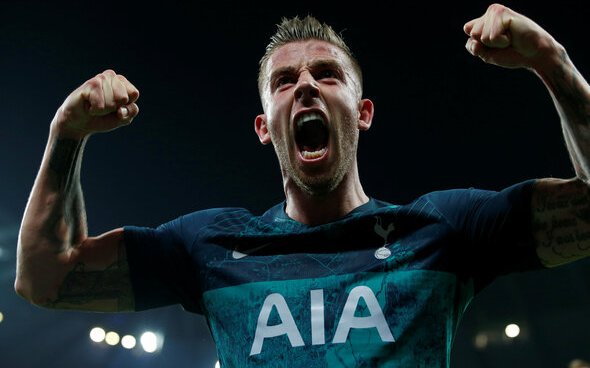 The Sun reported on Friday that Man United would decided whether to make a move for the Spurs centre-back next week with his £25million price making him a tempting option.

The national newspaper claimed that Solskjaer didn’t want to add Alderweireld to his squad and instead wanted to work on using his coaching ability to make the club’s current centre-backs better.

This reported stance saw Goldbridge, who is the host of the United Stand, a show which has 455,344 subscribers on YouTube, take to his personal Twitter account to applaud the Man Utd boss.

If Ole doesn't want Alderweireld I applaud him. He's 31 next season, he'll want huge wages, and in two years when the rebuild is complete he'll be retiring. Fans need to move away from quick fixes and be patient

“He’s 31 next season, he’ll want huge wages, and in two years when the rebuild is complete he’ll be retiring. Fans need to move away from quick fixes and be patient.”

Normally Goldbridge is on Twitter urging Man United to sign players, but that isn’t the case when it comes to Alderweireld. Despite the 6ft 1in tall enforcer (Source: Transfermarkt) being very reasonably priced due to a clause in his Spurs contract, Goldbridge isn’t keen. However it’s understandable why the YouTube personality has his doubts on this occasion. Alderweireld may have had another fantastic campaign with Mauricio Pochettino’s side this season, he has featured 49 times, given his age; he is a gamble. The centre-back is 31-years-old and did notably struggle with a long-term hamstring injury in his 2017/18 season. So it’s understandable why Goldbridge and Solskjaer may not be keen on welcoming Alderweireld to Old Trafford, however it’s clear a new centre-back has to arrive. While the Man United boss is thought to be content with his current options, if Chris Smalling or Phil Jones regularly feature next season then the club can stop having top-four ambitions already.