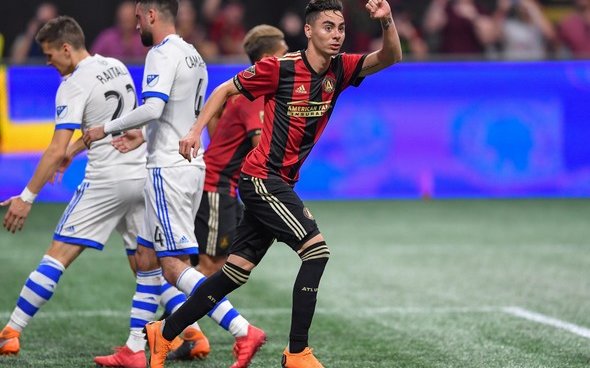 Atlanta FC attacking midfielder Miguel Almiron is set to make a £22.1million (€25million) transfer switch to Tottenham after dazzling for his current club, according to journalist Andres Riquelme on Futbol a lo Grande.

The reporter, via the Twitter account of the Paraguayan football news programme on radio station Monumental 1080am, claims that Spurs are set to be the next club of the 24-year-old and that the north London outfit are set to splash out on his capture.

Paraguayan international Almiron has been in dazzling form for the MLS side in 2018, scoring 12 goals and chipping in with a further 13 assists to have been involved in 25 goals for Atlanta.

Almiron’s form in 2018 has been brilliant but there is a significant difference between the American league and England’s top flight, and so that sort of fee is a massive gamble for Spurs.

His international record at just the age of 24 suggests that he is destined to become a top player no matter which league he is playing in but do Spurs really need to splash the cash for someone who is likely to be behind Christian Eriksen in the pecking order?

If he can show the same sort of goalscoring form for his new side, then the answer is yes, but that is a big if and something Tottenham need to judge whether a big spend is worth green lighting in January.

There are not many details about this move, and so fans should be sceptical about this one coming off.

Spurs might well be tracking Almiron as a potential target but to say that a deal has already been agreed before the January window is likely to be the reporters jumping the gun, and there will be plenty of work that needs to be done before this takes place.