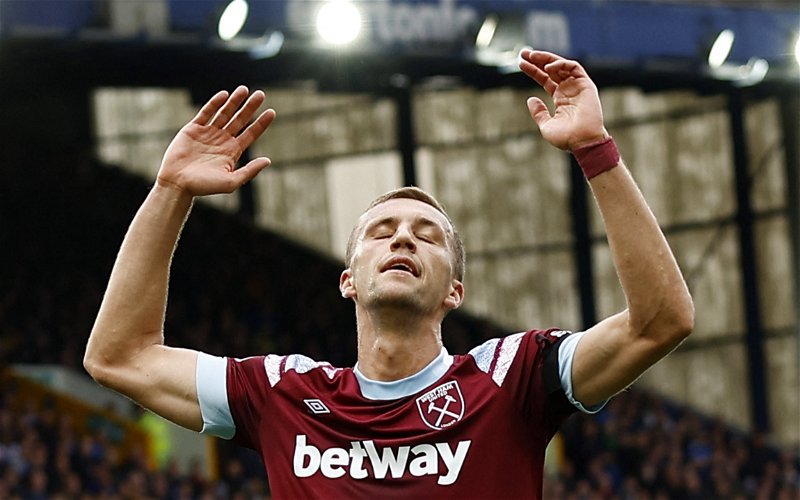 Presenter of Hammers Chat, Gonzo, has torn into West Ham United’s Tomas Soucek for his ‘unacceptable’ performance at the weekend.

The Hammers midfielder only had 22 touches of the ball, completed zero tackles and made zero key passes in their Premier League clash, before he was substituted by David Moyes after 60 minutes.

It’s not just Gonzo who has been critical of the midfielder’s displays recently, as TalkSport’s Tom Rennie labelled Soucek’s recent performances as ‘woeful’ prior to the game at Molineux.

Speaking on his YouTube channel, Gonzo didn’t just criticise Soueck’s passing but also ripped into the fact he made no tackles when on the pitch.

“There’s always been the feeling that Moyes picks because he does the other stuff – he does the tackling and the clearances and interceptions and all that. But during that game against Wolves, he made no tackles I don’t know how David Moyes is going to appraise this.”

We believe that there are plenty of reasons to be frustrated with West Ham at the moment and the performances are certainly not helping.

When you consider that Soucek has been a prevalent figure in the middle of the park for Moyes’ side, serious questions need to be asked because he’s clearly not doing his job.

The Hammers have only won four league matches in the duration of the 2022/23 campaign and scored 15 times which is a tally that they share with Nottingham Forest. Only Wolves has a lower tally in the Premier League, a side who’ve just beaten West Ham.

Pressure is on for the club and David Moyes, in fact there’s a report that the club are considering replacing the Scot with former Burnley boss Sean Dyche.

Their next fixture is against fellow relegation-battling Everton, failure to pick up three points could spell the end for Moyes’ time at West Ham.