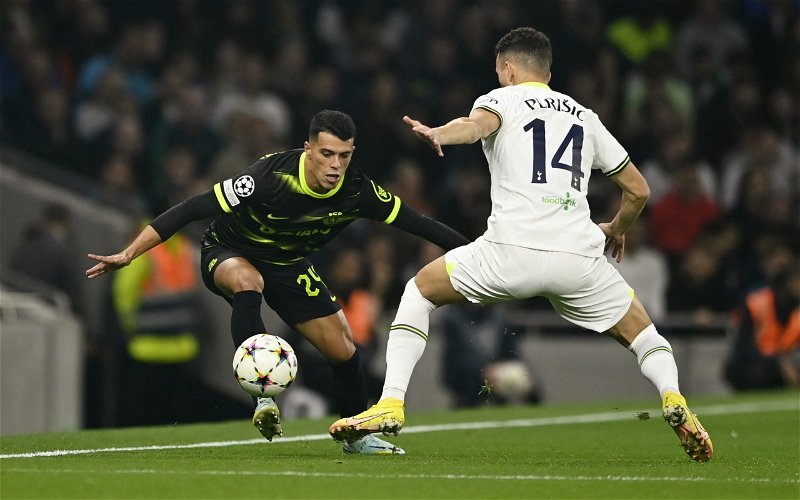 Tottenham Hotspur are set for new talks with Sporting CP about signing Pedro Porro, according to a report.

Tottenham’s interest in Porro is well known, and a deal to sign him really should have been wrapped up by this point, given that they were believed to be close to a £35m agreement at the beginning of January.

Transfer guru Fabrizio Romano has claimed that the Spaniard is Antonio Conte’s priority, but the deal is stalling because Spurs are yet to agree to paying the release clause of around £40m, and Sporting will not settle for anything less.

The deal is also being complicated by the fact that Matt Doherty and Emerson Royal are happy at the club, meaning Conte is unable to free up the space in his squad to bring in a new right wing-back.

According to a report from the Daily Mail, however, Tottenham are set for new talks with the Portuguese club next week, in light of Emerson and Doherty ‘failing to deliver’ at the moment, and other option Djed Spence barely getting a look in.

It is detailed that Sporting’s stance remains the same, and they will now allow the 23-year-old to go unless the release clause is met, so it is unclear at this stage how the discussions could go any further.

Tottenham are in dire need of a new right wing-back, especially given the scathing criticism received by Emerson for his performances so far, being labelled ‘dreadful’ by journalist Josh Bunting.

Porro would be able to offer so much more to the attacking output of Conte’s side, particularly specialising in assists, averaging 0.39 per 90 over the past year, in the 99th percentile compared to other right-backs.

Lauded as a ‘baller‘ by journalist Jack Collins, the former Manchester City man also averages more interceptions and blocks than Emerson per 90, so he would be an upgrade in a defensive sense too, and Daniel Levy should pay the release clause to ensure that they win the race, before another team does.