Tottenham Hotspur defender Japhet Tanganga has been slammed by journalist Alasdair Gold for his display on Boxing Day.

Antonio Conte’s men were forced to settle for a point at the Gtech Community Stadium despite late pressure from the Lilywhites seeing Harry Kane almost seal a winner. 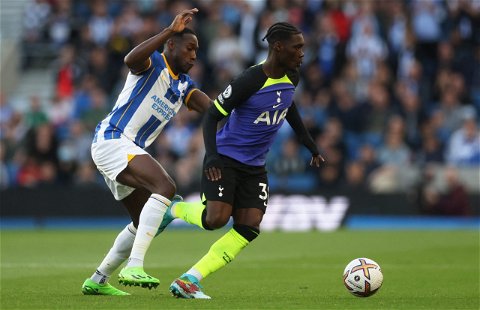 And it only lasted 67 minutes as Conte hooked him off for Davinson Sanchez after the 23-year-old gave away three fouls and lost possession six times (via Sofascore).

Having been involved in the poor defending on display for both of Brentford’s goals, Gold tore into the Englishman following the full-time whistle, handing him a 4/10 rating.

He said: “His first start of the season and he was up against one of the toughest challenges in the Premier League right now in Ivan Toney and it showed as the Brentford man ran him ragged throughout.”

Gold is absolutely correct. It was a dismal display from Tanganga, who had very little luck against Toney as the striker was able to get his name on the scoresheet in the second half.

With Cristian Romero returning to the squad following his World Cup triumph, this does feel like a big missed opportunity for Tanganga to stake a claim in Conte’s plans.

And in the bigger picture, with speculation over his future at Spurs, this could well be the final nail in Tanganga’s coffin at Spurs, with Conte believed to be open to green-lighting his departure.