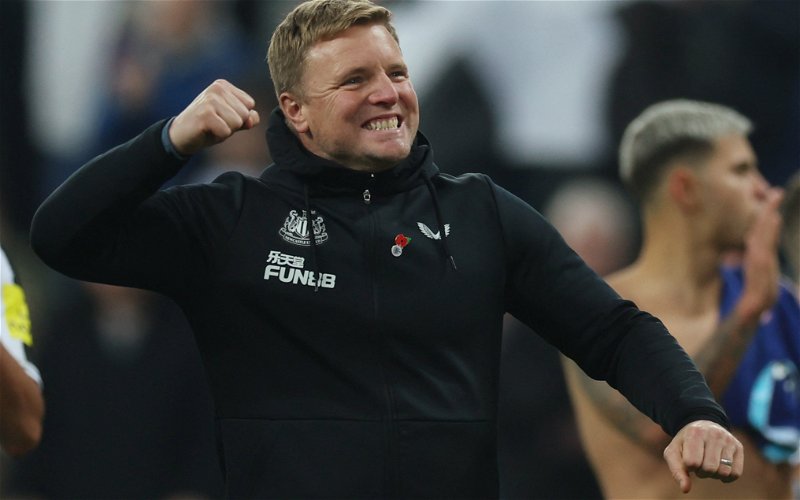 Sky Sports pundit Paul Merson has heaped praise on Newcastle after their stunning start to the season.

Eddie Howe’s side currently sit second in the Premier League following their 3-0 Boxing Day win and have lost just one game in the campaign so far.

The swift turnaround Howe has overseen since his arrival with Newcastle in 19th place has been remarkable, and they will now be dreaming of more success and European qualification.

Speaking ahead of the win against Leicester City on Sky Sports, Merson expressed his delight at Newcastle’s progress and praised the smart running of the club for the improvement on the pitch.

“We say they’ve got all the money in the world, they’re going to do this, this and this – they’ve bought so well.

“They’ve got a brilliant manager in Eddie Howe, and I just think all the players have all been eight and nine out of ten so far; they’ve got to perform and carry that on.

“I just said to the lads – would you win the League Cup or come fourth in the Premier League? You haven’t won a trophy for a long, long time.

“I wonder what they’ll do. For me, I would take the League Cup because I don’t think this is going away, this Newcastle thing. I don’t think it’s a one-hit wonder where if they don’t do it this year, that’s the end of it and they miss the boat.

“I think Newcastle will be around for a long, long time.”

We think Merson is correct in his assessment that Newcastle have bought well, as most of their transfers within the last two seasons have been resounding successes.

Big-name stars Bruno Guimaraes and Sven Botman have earned rave reviews, whilst even their recruits that went under the radar such as Nick Pope and Dan Burn have been brilliant, with the goalkeeper going to the World Cup with England while the ex-Brighton defender has admirably filled in at left-back as he was tipped to join the Newcastle contingent in Qatar.

Arguably the biggest improvement under Howe has been the turnaround of some players he inherited, with Joelinton and Miguel Almiron in particular going from flop figures to two of their best players.

If they continue their current form, Howe’s side could even challenge Arsenal and Manchester City at the top of the Premier League, which would have seemed unimaginable as recently as last season.