Celtic may now feel even more harshly done by towards the officials following their midweek victory away to Motherwell after footage was posted online.

Ange Postecoglou’s men maintained their grip on the Scottish Premiership as they made the short trip to Fir Park where they were able to claim a 2-1 victory.

However, the game came with plenty of controversy, with Jota seeing a goal chalked off for offside by VAR, which upon replays, looked like it may have been the wrong decision.

And there may now be further frustration from the Hoops’ camp after footage of a strong challenge on Carl Starfelt by Josh Morris.

The 31-year-old midfielder went flying into a challenge on the Bhoys defender with his studs raised and failed to make any contact with the ball.

We think there is definitely a case to be made for Morris being shown more than a yellow card for this challenge, purely for the speed at which he crashed into the Swede. 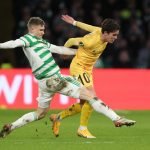 Postecoglou will be pleased to see Starfelt walk away from this challenge as it could have been much worse for the defender had his foot been planted on the ground.

However, it does beg the question of how VAR did not view this as anything more than the yellow card shown by the referee, as Morris had clearly put Starfelt at risk of a serious injury with this reckless challenge.