BT Sport Pundit John Hartson has slammed the VAR decision to rule out a Celtic goal scored by Jota in their most recent outing.

Earlier on in the week, the Bhoys managed to claim a win on the road in the Scottish Premiership as they just squeezed past Motherwell with a 2-1 victory.

Goals from Kyogo Furuhashi and Daizen Maeda were enough to give Ange Postecoglou’s men all three points on the day, despite a late consolation from Ross Tierney.

However, Celtic may have cruised to victory in a more comprehensive fashion had Jota’s goal not been ruled out by a fairly questionable, and certainly marginal offside call.

Indeed, the graphic aired on TV to show the lies being drawn by VAR when making the decision didn’t do much to add clarity to the situation and Hartson seemed pretty bemused by it all.

He took to Twitter to share an image from the game and added the caption: “Good morning… You couldn’t make it up.”

Do you think it was offside? 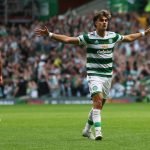 TIF thoughts on Celtic and the offside…

It’s clear to see just how tight the call is and so it’s odd that the VAR image shared to TV would show the line being drawn from such a long distance, while also being presented at an unhelpful angle.

VAR has only just been introduced into Scottish football this season and so it’s no great shock that it would face some teething problems but offside calls should be the least subjective decisions being made in each game yet this call has still stirred plenty of debate.

Celtic manager Postecoglou claimed he wasn’t ‘excited’ about the technology arriving in the SPFL and perhaps we are now seeing why he felt ambivalent about it.

In the end, it didn’t cost the Bhoys any points but it was still clearly contentious enough to have former footballers like Hartson expressing their discontent online.