Back in early October, it was reported that Ricky Martin would be leaving the Hammers in favour of a move to Stoke City, so a key role within the club was left vacant.

It seems this claim was accurate, as West Ham have now officially announced Martin’s departure while also handing Brown the position of interim academy manager.

While talking about the latest news on The West Ham Way podcast, Ex issued his approval of the decision, while revealing that Mark Noble was heading it.

He explained: “Great appointment, that. Kenny played for the club, loves the club. His dad is an absolute legend at the club, and currently – a bit of trivia for you – the oldest living ex-West Ham player. So he’s obviously got West Ham blood.

“His son plays for Arsenal, is doing really well at Arsenal. So he knows what it’s like to be a parent of a player trying to make it through the academy as well.

“He’s currently the head of coaching. He’s also had a similar role, an assistant role at Millwall and he’s done bits of it at Dagenham. He’s also very qualified as well. He’s done a number of courses in the right areas.

“So, for me, Kenny Brown is the right appointment and Mark Noble is the one behind this appointment.”

TIF Thoughts on West Ham and the decision…

Noble only retired at the end of last season and so his new role as the West Ham sporting director will be his first full-time position in the game beyond his playing career when it officially begins in the new year.

With that in mind, his early decisions will probably be watched carefully, and while it remains to be seen how well Brown does in the job, it’s a positive sign that it has been met with approval from club insiders such as Ex at this stage.

To be fair, Brown shouldn’t take too long to adjust to the role as he has been back at the club since last January working as the assistant head of coaching from the U9s to the U14s. On top of that, he spent five years as an Iron in the 90s, making 82 appearances.

Do you think Mark Noble will be a good sporting director at West Ham? 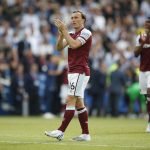