Journalist George Sessions is aware Antonio Conte is a huge admirer of Cristiano Ronaldo but feels a move to Tottenham Hotspur is unlikely.

The Portuguese superstar became a free agent this week as the fallout from his interview with Piers Morgan ended in an imminent mutual contract termination at Manchester United.

Ronaldo will now look for a new club with the World Cup a chance for him to demonstrate what he can still do for potential suitors.

However, considering the five-time Balon D’or winner earns in excess of £500k-per-week it could be difficult for him to find a move.

Sessions has ruled Tottenham out of the race despite Conte’s fondness for the player. Speaking on Chris Cowlin’s YouTube channel he said:

“Conte definitely likes him. The pre-match Man United he was sort of chuckling about him scoring the hat-trick the last time in the previous game and he’s always been very, very highly complimentary about him obviously one of the world’s greatest ever.

“I don’t think it probably could happen just because of Ronaldo’s wages.”

Would you even want Ronaldo at Spurs? 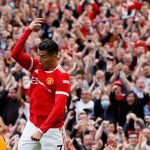 No, we don't need that baggage!

With over 700 goals in his career, there is no denying that Ronaldo would bring another valuable dimension to Tottenham’s attack.

However, considering he started just four times in the Premier League for United this season and that role of squad player led to his demise at Old Trafford it’s perhaps reasonable to suggest that he would fancy playing second fiddle to the talismanic Harry Kane at Spurs.

The England captain has enjoyed a fine start to the season scoring 12 times in 15 league appearances and with Richarlison to cover, the north London club are well stacked at centre-forward which makes any dream move for Ronaldo unlikely.