Leeds United centre-back Liam Cooper is a player who has become too mistake-ridden and should not be starting under Jesse Marsch.

This has been suggested by presenter and YouTuber Conor McGilligan, who has shared his frustrations towards Cooper’s recent displays on the One Leeds Fan Channel.

The January transfer window was a recent topic of discussion for McGilligan, and defence is an area in which he wants to see Leeds improve.

He believes one way to improve would be to remove Cooper from the starting XI, with the 31-year-old playing all 90 minutes in seven of the last eight Premier League games (via Transfermarkt).

The Scotsman had his struggles at the weekend against Tottenham Hotspur and was handed just a 5/10 rating following the game by LeedsLive, with McGilligan calling for him to be cut from Marsch’s XI since the trip to north London.

He said: “I think what we’ve seen in this last month is what we’ve all been saying – and people might like him – but Liam Cooper is too mistake-ridden.

“Listen, and I know he can play a cross-field ball and people have liked his leadership at Leeds for many a year and people like Cooper, but I’m not here in the like and friend business. I want a quality centre-back to come in and be able to keep Leeds in the Premier League and evolve with Leeds.”

There is no doubt Cooper, who was hailed as ‘unbelievable’ for his aggression recently, has been a tremendous servant for Leeds over the years, with 255 appearances across all competitions to his name for the Whites. 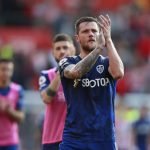 However, we do agree with McGilligan’s point that there should be no room for sentiment, with Marsch’s men once again hanging around the relegation zone.

With Cooper back in the side, Leeds have kept just one clean sheet in their last eight league games, and whether that is down to Cooper or not, it is apparent changes need to be made to Marsch’s defence.