Leeds were rocked during pre-season when big-money signing Sinisterra picked up a hamstring injury but managed to hit the ground running since returning managing to register four goal involvements in 10 appearances.

However, he appears to have now hit another stumbling block as Marsch confirmed that the winger had picked up an injury in his foot, which also saw him miss out on the win against Liverpool last weekend.

Hay has now spoken on The Phil Hay Show about the injury to Sinisterra and how Marsch set the alarm bells ringing over how long the winger would be out for.

(1:00) “Bad news, yeah, he’s certainly broken for the next three games, so we’re not going to see him this side of the World Cup. He has a problem, according to Jesse Marsch, affecting the tendons in his foot, around the metatarsal.

Will Sinisterra play again this year for Leeds? 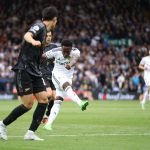 “Leeds, I think are minded to think that it’s not quite as severe as it could be but Marsch did ring the alarm bells slightly by saying, if these injuries are bad, they can lead to quite a prolonged period of time [out of the team].”

It is undoubtedly a huge blow for Leeds to lose Sinisterra for a prolonged period of time as he ranks third for both shot and goal-creating actions in the Premier League this season (FBRef), so he will be an obvious miss.

However, it could come at the right time for another exciting winger in the form of Crysencio Summerville who burst onto the scene very much so last weekend against Liverpool when he netted a last-minute winner at Anfield just a day before his 21st birthday.

Therefore, this could now be a chance for the Dutchman to showcase his ability and stamp his mark on the first team, so when Sinisterra returns, he doesn’t naturally walk into the first team and Marsch has a selection headache on his hands.