Presenter and YouTuber Conor McGilligan admits he’s spoken to people about Leeds United’s Leo Hjelde, claiming he has only heard good things about the defender.

Hjelde was perhaps a left-field signing last summer when Leeds brought in the teenager from Celtic without even making a first-team appearance for the SPFL giants – but the Whites clearly saw something in him.

McGilligan has now spoken to someone at Celtic who’s seen Hjelde play first-team football, and he is now very excited to have the youngster at Leeds, while his enthusiasm over the youngster will only have increased after he put in a 7/10 performance in the Carabao Cup last night.

Speaking on his YouTube channel, McGilligan spoke about the rave reviews of Hjelde from his time north of the border, and claimed that fans should be excited after seeing him in the League Cup.

He said: “I do really like Hjelde, I’m a massive fan of him. They [Celtic] absolutely thought he was a player, they really did. 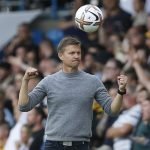 “When they loaned him out to Ross County, there were glowing reports.

“Heard a lot of good things about him, so when I was watching him [against Wolves], ball progression [was] fantastic, strong and I thought Hwang [Hee-chan] had a problem against him, hence why he moved on to the old boy, Llorente.”

Given that Liam Cooper is not getting any younger and Diego Llorente continues to put in stinking performances for Leeds, to have someone so young and seemingly capable in the form of Hjelde will be great news for the fans and Jesse Marsch.

It could be that after a campaign of cameo appearances and learning from more senior players this year, Hjelde will be ready to earn more starts in the Premier League and cup competitions to help establish himself as a first-team player.

However, given he is still very young at 19, he will need to be managed and coached very carefully to avoid burnout and to keep his confidence levels high, so Marsch has a big job on his hands to ensure Hjelde maximises his potential at Leeds.