Leeds United’s backline is something which worries Sky Sports pundits Jamie Carragher and Gary Neville when it comes to the Whites aiming to retain their Premier League status.

This is according to presenter and YouTuber Conor McGilligan, who has been speaking on the latest One Leeds Fan Channel video after featuring on Sky Sports’ The Overlap.

Jesse Marsch has managed to calm some of the nerves around Elland Road in recent weeks following back-to-back wins in the Premier League against Liverpool and Bournemouth.

However, the Whites were unable to keep a clean sheet in either of those games and even found themselves 3-1 down to the Cherries at the weekend.

And it is apparent this is an issue which has become a clear weakness to those in the media, despite Marsch’s men climbing up the table to 12th spot:

McGilligan revealed: “I think both of them [Carragher & Neville] are a little bit concerned when it comes to Leeds and us going forward and us being able to maintain our Premier League status – and that back four was something they both honed in on-air and off-air, which I found quite fascinating.”

It is hard to disagree with Neville and Carragher’s concerns over the Leeds defence, as they have conceded 22 goals in the Premier League so far – the fifth-highest total in the league. 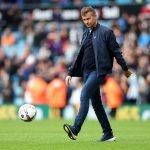 Perhaps it is lucky for Leeds that there are some far worse defences in the league, with the likes of Bournemouth and Nottingham Forest conceding 32 and 30 goals respectively.

But although some clubs have conceded more goals than Leeds, it is a damning statistic that in their last 12 games across all competitions, Marsch’s men have kept just one clean sheet. Therefore, the fact there are concerns from impartial sources over Leeds’ defence is a sure sign this is something the American needs to address.