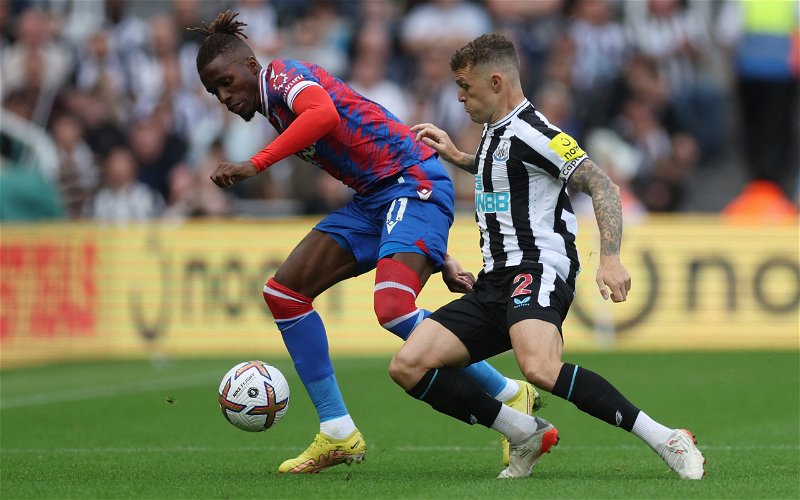 talkSPORT’s football correspondent Alex Crook has admitted that he wouldn’t be ‘surprised’ to see one of Wilfried Zaha’s potential suitors reach out to Crystal Palace.

The Ivory Coast ace sees his contract with the Eagles expire at the end of the campaign raising fears that he is on his way out of the club.

Following reports from The Sun that claimed the south London outfit had offered the 29-year-old improved terms in order to fend off interest from elsewhere Mail Online have revealed that the player is yet to agree to an extension which will be a concern for Palace supporters.

Rumours surfaced back in August that Chelsea were considering a bid for the forward and Crook believes they could return with an offer.

“I was told in the summer that Chelsea had an interest and that wouldn’t surprise me if that was revisited.”

Patrick Vieira and company may well have to start planning for life without their talisman and it is likely to have a major impact on the club’s fortunes.

Dubbed ‘outstanding’ by well-known pundit Ally McCoist not getting a transfer fee for their star player will be even more a tough pill for those at SE25 to swallow.

Zaha is free to discuss a pre-contract with foreign clubs in January but with interest from within England and the lure of trying to prove himself at the top level in this country we may see the 28-cap international remain in London.

Nonetheless, after a career-best 14 goals in the league last season and having already struck five times this term his departure will be felt hugely at Palace no matter where he goes.