Bayern Munich are currently in the pole position to land Borussia Monchengladbach star, Marcus Thuram according to Matteo Moretto.

The Frenchman has been linked with the likes of Newcastle United, according to one report. His contract runs out next summer, so you’d expect the German side to consider cashing in on him. If they don’t he could leave Gladbach on as a free agent.

This season, the Frenchman has banged them in. He already has 10 goals in the Bundesliga and three assists. So, it’s no wonder the likes of Bayern are trying to sign him in January. 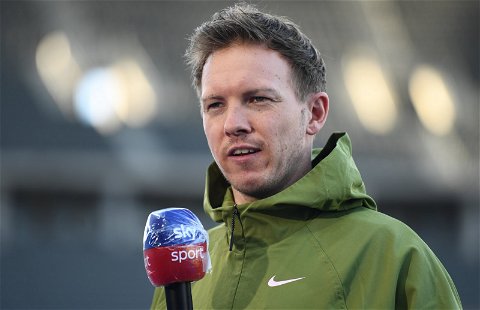 Thuram has mostly operated as a centre-forward this season However, he can also play out wide if called upon. With versatility like that he could be a useful attacking asset for a number of clubs.

His dad is former France legend Lillian Thuram, a former World Cup winner. Like his father, Marcus also has some French caps to his name, but not as many just yet.

“Bayern Munich is the team most interested in Marcus Thuram, from Borussia Mönchengladbach. The Bavarians want to tie him up already in January. In the race there is Borussia Dortmund, but also many Italian teams. Contract ends in June,” Moretto’s tweet translated to.

We think landing Thuram would be a strong bit of business from Bayern. When you look at their squad, he could well be brought in to play as a striker.

That’s where the German side look the lightest at the moment, as for wingers, they’ve got a number at their disposal who can play there.

Bayern are currently a Champions League side, looking at the Bundesliga table that won’t be changing next season. Thuram has featured in the competition before, but we could see him return there next season.

A move to Munich could be a big step for Marcus Thuram. It could take his career to the next level where he would be playing Champions League football on a consistent basis.