The Brazilian was having a poor afternoon as it was at the Emirates Stadium for Tottenham, before making things a whole lot worse when he lunged into Gabriel Martinelli to get himself sent off.

Prior to his sending-off, Emerson had managed to make just one tackle, was dispossessed once and didn’t put in one accurate cross during the time he was on the pitch (as per WhoScored), and Gold was particularly frustrated by the full-back’s performance. 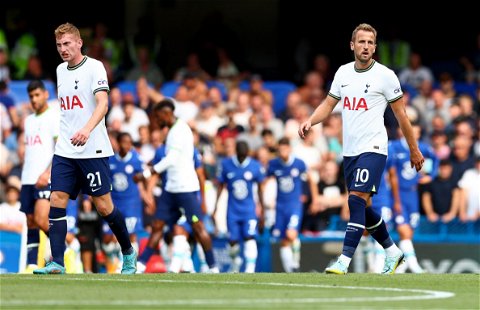 Despite highlighting positive elements of his game, Gold slammed Emerson Royal’s lack of attacking prowess on his YouTube channel following his latest display.

He said: “I remember a couple of moments on Gabriel Jesus when he really did well to anticipate, got his body in front of him as he was dribbling into the box. A couple of iffy moments, but I did feel his defending, on the whole, wasn’t too bad.

“Going forward, exactly the same scenario as normal – just looked like a deer in front of the headlights whenever he got over that halfway line.”

While Emerson’s red card dominated the headlines of the entire performance from Spurs and his individual display, he was far from efficient before his sending-off, as highlighted by the stats listed above – which could well see him lose his spot in the starting lineup.

Emerson may well be lucky to start again tomorrow evening away to Eintracht Frankfurt given the lack of trust Antonio Conte might now have in his full-back, who’d previously started all but one game this season.

The defender will now miss three games in the Premier League which could see him have to dislodge someone such as Matt Doherty upon his return, which is pretty much what he deserves for such a ‘stupid‘ decision – which is how former fan favourite Dimitar Berbatov described the defender’s actions. As well as this, Clive Allen called the challenge ‘dreadful’ and labelled him as ‘daft’.